As most of our friends know, we travelled to Nicaragua last year to visit the Gran Pacifica resort run by Patrick Hiebert, originally from Plum Coulee.
And as documented in last year’s blog we literally had a twist thrown in. Arlene had that nasty mishap. Thanks to Patrick’s staff and his graciousness, we were able to salvage what we could from last year, vowing to make the return trip.

Well, here it is, 2016 and we made it! This time we brought the kids, Alex, Sandra and Jacki.
As mentioned yesterday on Facebook, things didn’t start off that well.
It was a typically cold day to leave and once we made the mad dash from our car to the airport, we found out our first flight to Chicago with United Airlines had been cancelled. Heart break… We had two more connections to make and people waiting at the other end to pick us up and a limited way in which to communicate with them.

Luckily, United was able to re route us with Air Canada to Toronto to get to Houston and make our connecting flight to Managua. It was a day of keeping track of passports, customs forms, figuring out the customs process, trying to grab some sleep on the planes. A bit daunting with five people.
Grabbing airport food when we could..with eyes bigger than our stomachs. Flights were generally ok with enough time in between not to have to make the dash for last call as we saw others doing, especially in Houston. Any one of them could have made it as a running back the way they were dodging on coming foot traffic.

In Toronto, not sure if it’s the grey hair or if the attendant was bored, but we got picked up on one of those extended golf carts and zipped up and down the airport just for fun all the while, waving to others like royalty. Our kids kept their heads down as we zipped by trying not to let on that they knew us. You can catch all the action by clicking here .

I’ve always loved the look/color of the sky while up above the clouds. Something about it just never gets old for me. 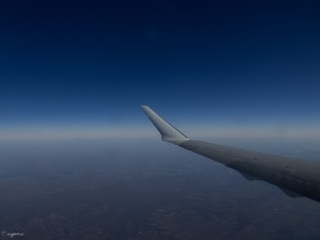 Whilst in Toronto, a few snow squalls passed through. Runways were icy and de-icing the plane was the norm. Made me wonder about the difference in the ability to keep planes going between places like Chicago and Toronto.

While in the air some read, some watch movies or some like me try to sleep. I find it difficult to hear properly even with a decent set of head phones. On this particular leg of the trip we were near the back where the engines were. Fair bit of competition for sound quality.

In Houston we had plus 16 C and needed to travel across the terminal to get to our next gate. The signage is very good and the tram took us where we needed to go…and besides…we had the Flash with us, how bad could it get?

Everywhere you go…people are engaged… 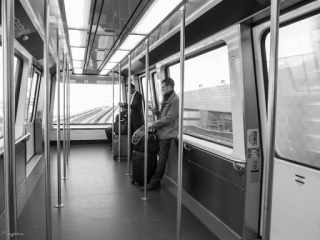 With 3 1/2 hours to go and leaving over the supper hour, it was time to grab a quick bite. Next time we’ll think with our heads instead of our stomachs though. Food was decent, but, dang we probably should’ve picked something a little smaller. Burgers fries drink in an airport times 5? Well you get the picture…

Hit some major turbulence on the way in to Managua, but landed safely. Observation as we took off. We called ahead to book roomier seats. As did another tall guy across the aisle from me. When the flight attendant came to give us instructions, it was discovered the other fellow couldn’t speak english. He was immediately moved because, according to the attendant, if instructions were given there would be hesitation. I felt bad for him. He got moved into the row in front of him that an elderly couple (no not us) occupied. It was a very tight squeeze for him. There was something odd about the way he moved his leg that he mostly kept in the aisle. Then it dawned on me. It was a prosthetic. 3 1/2 hours of moving and adjusting trying to find a comfortable position.
The gal sitting in the row of three with us was heading to Nica as well. She was a little bummed because of getting bumped to a later flight for reasons I don’t remember. The worry for us is that she needed to find a taxi to take her to Leon, a couple of hours away, alone and in the dark. She also didn’t have the required U.S. money to purchase a visa at customs. Canadian only. So we gave her $10 so she could at least get in. She insisted on giving us $20 Canadian. Good deal for us I guess.
Once in the airport, we saw her stride off, but there was so much going on with getting our own crew through the process, we lost track of her. Our parental Spidey Sense was going off big time and we can only hope she arrived safely.
One of the cool things about getting an opportunity to travel is meeting different people. Realizing that we aren’t the only ones with problems or taking up the air here. We think that if we spent a little more time concerning ourselves with helping others, maybe our problems wouldn’t seem so tall.
Anyway, that’s our thought for the day.
The airport went smoothly. Having been there before helps. We were greeted by our friend Osman. What a sight for us! He and his colleague Juan packed us up in a newer 15 passenger van and whisked us off to the resort. The main road to the resort is nicely paved. It was under construction last year, so the ride was much shorter this time around.
Our beautiful room and a few fruit plates waiting for us in the fridge, as well as, a few brewskies. A very nice end to a very long day. All the angst about keeping schedules, important paperwork, passports and locating luggage all melted away as we gathered around the dining room table to decompress. Somewhere after midnight everyone was asleep and we woke up to this…and it feels great! #granpacifica #nicaragua http://vidadelmarnicaragua.com/