What a whirl wind week in the CFL. Montreal Allouettes fire their head coach after only 5 games and the Winnipeg Blue Bombers hand the reigns to a man that was #4 on the depth chart last season in Justin Goltz.

While it’s been well documented that starter (when he’s healthy) Buck Pierce is a fierce competitor and leader. It’s also been well documented that he doesn’t get to finish very many games. That fact has been an unsettling force in the Bomber camp the last few years, in that it must become hard to game plan when you’re never quite sure who will fill the position of arguably the most important position on the football team.
Last year was a revolving door between Pierce, Elliott and Brink. No continuity and it showed. If memory serves, the team performed their best when Buck was up in the booth helping the much maligned OC, Gary Crowton who still appears to be trying to get a handle on the CFL game. I’m sure Pierce still feels the fire inside and wants badly to turn this thing around. It has to be a tough to go through having your job taken away and given to someone else.
Perhaps he’ll get another chance, Kevin Glenn did it in Calgary after all. 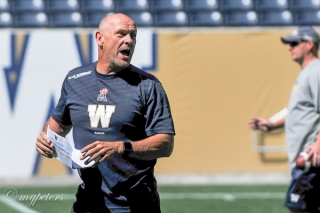 (The man also on the hot seat is OC Gary Crowton)

And so it is that Coach Tim Burke has decided enough is enough. The more experienced Pierce did not put up much for numbers and after being allowed to venture outside the pocket, which was supposed to be designed to protect him this year, he was hurt while taking a hit to the abdomen area. The games in which he stayed in the pocket, he was sacked some 14 times in just a few games. That’s as many as some QBs have in a season.
Whether it be poor play from the O-Line, poor play from receivers not getting open, poor decision making by Buck or all of the above, it’s time to turn the page.

Unfortunately, GM Joe Mack has done little to secure another qualified QB with experience. There were opportunities to bring back Kevin Glenn out of Calgary or the up and coming Mike Reilly from BC. However the trigger was never pulled.

So here they are, with a rookie QB who seems to be able to take a hit, but needs some serious game time to hone his craft, and a supporting cast that really need to step it up and compete to stay in the race.

The players will tell you it’s early and there’s lots of time to turn it around. I say why wait?
Soon it will be Labor Day with back to back games with a Rider team that shows no signs of slowing down. They are already 1-4

So gentlemen, the time is now. The fans are getting restless. The shine is coming off the new IGF. It’s a beautiful bldg, but it needs a team that can win at home at the very least.
I believe there’s talent on the field.

Chris Matthews, Chad Simpson, Henoc Muamba and even Jade the Blade Etienne can make plays. These young players could be the core of a good football team. Do the Bombers have the people in place to guide them there.

I hope so, I would love to be taking pictures of the home team scoring TDs instead of the opposition.