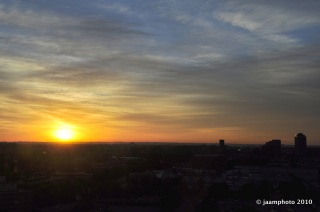 Woke up in time to see the sun rise. Mostly because the pain in my gut was like a someone stuck a sword right through me. I kinda miss home cooking. Eating on the road is a bit of a crap shoot (no pun intended). We’ve made some changes to our eating habits and we’re finding it tough to get the “right stuff” while eating out.
There’s no shortage of fast food outlets, not too many that serve a spinach salad with blueberries, strawberries and a vinagerette dressing. Oh well, this too shall pass, as did the stomach issue….if you know what I mean.
Well, today we are going to attempt to get to a different part of the city. So far, other than the road construction, it hasn’t been too bad. The Science Museum has an exhibit of the Dead Sea Scrolls we’d like to get to. First time ever they’ve been on display anywhere, according to the website. Looking forward to that if we can get in.
Later today……
Well, it’s 10 pm and we just got back. We did get in to the Science Museum of Minnesota in St Paul and took the tour. When they say it takes over an hour, they’re right. They have a bunch of displays set up of artifacts from the region where the scrolls were found. You take what looks like a cordless phone and punch in numbers along the way to get audio messages describing each station. The history lessons really help set up the significance of the scrolls. They are kept in a very dark climate controlled room. They look extremely fragile. Just amazing they are still intact at all after some 2000 years!
After the tour we strolled around St Paul a bit and took pictures of some of the interesting buildings. Kinda reminded us of Wpg….just cleaner.
We had lunch at a sidewalk cafe called Wild Tymes. It was situated in a kind of an area that looks like the exchange district in Wpg. Bit of an outdoor market with a couple of sidewalk cafe’s.
We then took a stroll to see the Mississippi River which runs just past the Science Museum. Quite a grand body of water. Tug boats still pushing barges up and down the river and several Paddle Wheel boats giving tours.
We made our way back to our van and headed off to an area called Lake Calhoun. When we got there, we realized we were pretty tired and headed back to the hotel for a snooze. Lake Calhoun looks like a really nice treed area surrounding some lakes with walking paths all around. If we have time, we’ll head back there for an afternoon.
In the evening we headed off to find a Starbucks in a place called Wayzata. It’s a little town on Lake Minnetonka. Population says 4113, but I’m guessing there’s a swell of tourists in summer. Just looks like that kinda place. There must be a stack of cash around as well as every car seemed to be a high end Beemer, Mercedez, Lexus, Acura, Caddie etc etc. Walked past several restaurants and felt very out of place. The lake is nice looking and fair sized. The boats docked in the Marina weren’t your garden variety fishing boats. Mostly BIG boats.
We did find a great little restaurant called Maggies. Looked like a family run place where everything is home made. Stopped in for some fabulous soup and pie. The kid serving us was so down to earth and honest. They serve breakfast all day and at realistic prices. Not the $18 for a plate of pancakes they charge at our hotel…lol.
Our hotel, typical bacon and eggs breaky….$15. $4 for a cup of coffee. Needless to say we’ve been eating elsewhere.
The traffic to and from our destinations was good today. Last night was crazy in that we were travelling 4 mph for long long stretches due to road construction. We past some of the crews last night as they were working.
Tonight….you couldn’t even tell they had been there. Roads were fixed and traffic flowed at normal speeds. Now that’s how you get road construction done!
Well, last night for this hotel. We decided to stay a couple more nights as there’s a few more places we’d like to see. We tried to extend our stay here but unfortunately, we couldn’t get the same $50/night…lol. More like $175/night. So we did the priceline.com thing again and got a place down the road for close to the same price we’re paying now.
Now…it’s time for some much needed sleep….Pix from Day 3